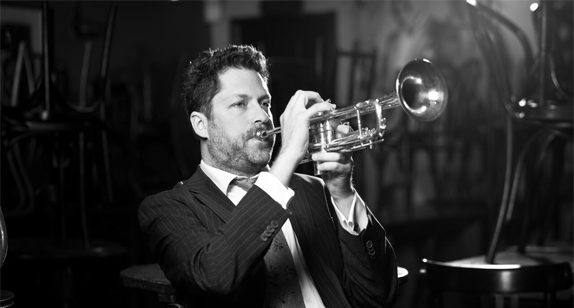 Trumpet player and percussionist Brant Tilds was born on a U.S. Air Force Base in South Carolina during the Vietnam War.  He grew up in Detroit, Michigan, and started sneaking into bars and clubs at 15 to play at jam sessions, and joined the Musicians’ Union at 16.  After graduating from the Interlochen Arts Academy, and then Indiana University, he moved to Los Angeles, California, to study with Charlie Haden at CalArts. 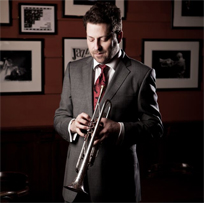 There, he led his quintet, and his 10 piece group Latin Monster with Humberto Gomez Vera, and performed at various clubs and festivals around Europe.  During this time in Copenhagen, Brant was commissioned to write a number of pieces for audio and video release (Zentropa Films)as well as recording on principal trumpet with the Dansk Radio Underholdnings for film soundtracks on Metronome, leading his quartet at the Copenhagen Jazz Festival, and premiering the Poul Erik Christensen Trumpet Concerto. Since his move to England in 2004, he’s performed at festivals and halls around Europe with acts from the Latin world such as Cheo Feliciano, Los Hermanos LeBron, Roberto Pla to the London Early Opera and a modern classical trumpet and piano duo (with a soon-to-be-announced-very-exciting program!) and released his 2nd CD as a bandleader, GREEN GOLD.

Currently he’s working on an Arts Council England project in collaboration with The Bear Club in Luton, performing the first Sunday of each month with his Quintet.
….